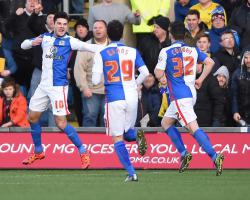 The Scotland international leaves some huge boots to fill, having scored 85 goals in 169 appearances since joining Blackburn four-and-a-half years ago.

But Watt, signed this week from Charlton and given the thankless task of replacing Rovers' star man, got off to a decent start with a debut goal while Marshall scored twice as Oxford's cup adventure was ended

Rhodes' dash to the north east meant Rovers could only name six substitutes, but they rarely looked like being on the wrong end of an upset after Marshall fired them ahead from the penalty spot

Oxford had sent Swansea crashing out in the shock of the third round, but Michael Appleton's side could not repeat their heroics against the club who sacked him as manager after just 67 days in 2013

Goalkeeper Sam Slocombe prevented Rovers from taking an early lead with a flying save to keep out Elliott Ward's header.

United then fashioned their best chance of the first half, with Liam Sercombe's angled drive destined for the net until Jason Steele tipped the ball around a post.

But they fell behind in the 27th minute when Joe Skarz, a boyhood Rovers fan, shoved Simeon Jackson in the penalty area.

Rhodes is Blackburn's usual spot-kick taker, but Marshall has tucked a few away himself and made no mistake as he neatly sent Slocombe the wrong way.

Slocombe pulled off another fine save to tip Watt's fierce drive over the crossbar, but he was beaten again on the stroke of half-time.

Watt found space just inside the area and held off his marker before arrowing a low shot past Slocombe's fingertips and into the far corner.

Oxford, to their credit, piled forward in the second half but could not find a way through a solid Rovers rearguard.

Kemar Roofe, the two-goal hero of their 3-2 win over the Swans, was kept quiet until just after the hour mark, when he finally got a glimpse of goal only to drag his shot wide.