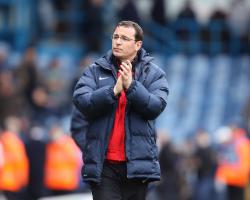 A national newspaper claimed Rovers were the first Football League club to wield the axe on their manager this term after defeat at Brighton left Bowyer's side in the Sky Bet Championship relegation zone.

However, the club later issued a statement denying Bowyer had gone and the news also came as a surprise to the 44-year-old, who was flying back with the rest of his squad when the story broke.

"It came as a complete shock," he said on Thursday.

"It's part and parcel of the industry we work in

It was reported wrong so we move on and just focus on this game now."

He revealed he learned he was trending on Twitter in the wake of Saturday's sacking claim and noted there was a flurry of activity on his and his players' mobile phones when their plane touched down on Saturday evening.

But the Rovers chief has not felt the need to have his position clarified by the Venkys this week.

"Not at all, it was a conversation that didn't need to be had so we've not had it," he added.

Blackburn's cause could be boosted by the return of striker Jordan Rhodes for the Lancashire derby, with Bowyer revealing the prolific marksman is "desperate to get back" from an ankle problem.

And the Rovers boss found an ally in Bolton counterpart Neil Lennon, who was been working under similar financial constraints at the Macron Stadium.

"He's a very good manager and really steadied the ship at Blackburn over the last few years," Lennon said of Bowyer.

"He's working within very limited constraints and they had a very good season last year, I see no reason why they won't improve again as the season goes on.

"I'm glad the (sacking rumour) is not true because it's far too early in the season and I don't think he deserves it anyway."