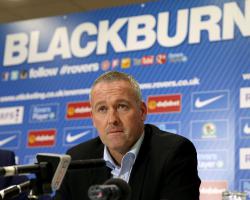 The 46-year-old Scot had been out of the game since being sacked by Barclays Premier League club Aston Villa in February but returned on Sunday when he was announced as the new manager of second-tier outfit Rovers.

Lambert spent his time without a job travelling the continent observing the likes of Real Madrid, Borussia Dortmund and Bayer Leverkusen, and he now feels revitalised as he looks to achieve his second promotion out of the division following similar success with Norwich.

"I've had nine months off and really enjoyed my time," he said.

"I did some great things in my time off and saw different teams training, meeting different people

The opportunity came up right out of the blue - would I consider it? I can't wait to get started, I feel refreshed and am really looking forward to Saturday's game.

I've been to some great clubs, great people, watched them training, getting a different view on football, and really enjoyed it."

Rovers remain under the transfer embargo that was placed on them in January after they failed to comply with Financial Fair Play rules, meaning Lambert will not be allowed to transform the current squad at first

However, although Bowyer often cited the embargo as a reason for Blackburn's struggles, Lambert wants to adopt a more positive mindset

"The more people talk about the lack of money, there's a negative thing on it because people can use that as an excuse," Lambert added

"The main thing for ourselves is to start winning games

But if you use it as an excuse it's always going to happen."

Rovers' managing director Derek Shaw, who was present alongside Lambert at his unveiling, revealed that the Scot may not even need to sell one of his current squad in order to exit the embargo

"It's something we've been working on for months now; we are making good progress," Shaw said

"I have stated before that we were possibly one sale away from being released from FFP, but we're not looking to sell a player

We have other irons in the fire which hopefully will clear us from that."