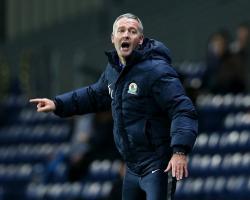 Rovers were held to a goalless stalemate with Nottingham Forest as Shearer, scorer of 34 Premiership goals when Blackburn claimed the title 20 years ago, watched on in a stadium which now resides near 'Alan Shearer Way'.

The 72nd-minute header Bengali-Fode Koita directed straight at goalkeeper Dorus De Vries was the type of chance he buried here in the mid-1990s, while Matt Mills' own nodded chance at the other end was tipped on to a post by Jason Steele in stoppage time.

That stop preserved Lambert's unbeaten start at the helm and the ex-Aston Villa manager has injected hope that they can deliver on Shearer's pre-match wish to see his old club return to the top flight.

"It's an exceptional return," Lambert said of accruing 11 points from a possible 15.

"If they keep going, then let's see what happens

There will come a time when we do lose at some point, but they've shown they can do (it)

They need maybe a little bit of help but 11 points from 15 has captured everybody at the football club - okay, let's see what can happen

None of that negativity that's been hanging around

It's a good time at the minute."

Lambert dubbed the opening 45 minutes, in which Ben Marshall's deflected effort came back off the crossbar, the best since he succeeded Gary Bowyer last month.

However, he bemoaned a hectic fixture list as they swiftly returned to action following Friday night's narrow victory over Rotherham.

"It's crazy, that turnaround - two games in four days," he added.

"We've not got the biggest squad to try and compensate that

It's a big ask, they deserve a lot of credit for the performance and picking up another point

Everybody else is having a winter break and we're having two games in four days."

Forest could also have done with a striker of Shearer's calibre as their winless streak on the road extended to seven games.

Boss Dougie Freedman believes their problems lie up top and hopes the new-year returns of injured strikers Britt Assombalonga and Matty Fryatt can be a catalyst for a late play-off surge.

"If I'm trying to get the team promoted, I don't think I've got enough firepower," he declared.

"You've got to win four or five games on the bounce

My firepower - Britt and Matty Fryatt - is coming back in January so our job right now is to get in a position to win four or five where it will mean something.

That's the kind of outlook that I've got on the night's result."