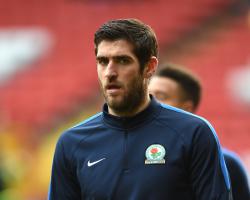 It was a well-deserved three points as the hosts bounced back in style from the weekend defeat to Hull which will ease any lingering worries about a battle to avoid the drop.

In truth, once Ben Marshall had converted a penalty he won himself in the 15th minute for his fifth of the season, the result never looked in doubt

This was confirmed with Shane Duffy's first Ewood Park strike just after the hour mark and Graham's perfectly-directed low header in the 87th minute ended Blackburn's worrying run of nine league games without a win.

Rovers also put an end to a winless home run stretching back to the first weekend in December and Lambert believes Graham's fitness is key to the team's success.

He said: "Danny Graham has scored at every level and it's funny because even when I was with Norwich, he was scoring goals with Swansea in the Championship.

You see his work-rate tonight, everything he gave us.

"If there's one guy I'm absolutely delighted for to score a goal it's him because he's a top guy, top pro and honestly if we can keep him fit, he will be a very good signing for us."

Blackburn also ensured they will go into this weekend's FA Cup fifth round-tie with West Ham in fine spirits and - given Fulham have the third best goalscoring record in the division - Lambert was particularly pleased with how his side minimised any threat from the visitors.

He added: "We were up against a Fulham team buoyant from Saturday and on the night I thought we were very good and didn't look like we were going to lose anything.

"Other than the shot at the end, they were nullified and they never dominated the game

I thought it was always us, we always looked a threat

It was a massive team performance.

"I thought from start to finish we were very, very good and we could have won by more

I thought we looked very good all night."

Fulham boss Slavisa Jokanovic was in no mood to defend his players and criticised the spirit that his side showed after a result that means the Cottagers remain six points from the relegation zone.

After comprehensively defeating QPR, it seemed like a corner had been turned, but they were never in the game at Ewood and surrendered meekly to a fifth defeat in their last eight games, which stretched their woeful away run to one win in 10.

And Jokanovic made no excuses for his team which he said "played without spirit".

He said: "I have to be disappointed

We played without spirit, without desire and this is very important to win the game.

They pushed us and won all the challenges.

"We didn't try to play football, we didn't do anything important today

It is a bad sensation

Today we played the worst phase of my month in charge

This game is without any spirit or any display.

"With this (tonight's) desire, spirit, competitiveness, it is not enough for anything."