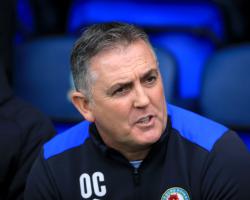 Two days after nearly securing an FA Cup replay against Manchester United, Rovers and Coyle have gone their separate ways with the club admitting they fear for their Championship status as they are second bottom with only 15 games remaining.

Coyle, who has previously been in charge of Burnley, Bolton and Wigan in the region, only arrived at Ewood Park in the summer having recently managed MLS team Houston Dynamo.