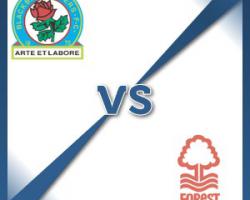 Blackburn V Nottm Forest - view commentary, squad, and statistics of the game live.Injuries mount for RoversBoss Gary Bowyer admits he is still "snowed under" with injuries at Blackburn ahead of Nottingham Forest's visit to Ewood Park.The contest comes too soon for Norway international Josh King, who may return on Tuesday against Millwall from a hamstring problem which has kept him sidelined since February.Full-back Alex Baptiste (hamstring) is still out but could make one of the final three fixtures before he returns to parent club Bolton while a similar problem has been hampering striker Rudy Gestede over the past three games, none of which he has started.Jason Lowe (foot), Grant Hanley (calf), Chris Taylor (groin), Shane Duffy (knee) and David Dunn (calf) complete the east Lancashire side's casualty list.Forest will be without the suspended Kelvin Wilson following his red card against Watford.Wilson was sent off on Wednesday night after kicking out at Hornets striker Odion Ighalo

It was the defender's second dismissal of the season so he will serve a four-match ban, meaning he will not be involved again this campaign.Michael Mancienne is expected to partner Jack Hobbs at centre-half at Ewood Park on Saturday.Danny Fox, David Vaughan and Henri Lansbury are among those pushing to get back into the starting line-up after Todd Kane, Gary Gardner and Ben Osborn were recalled against Watford