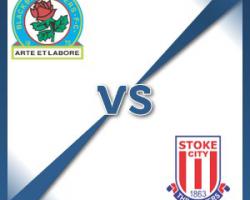 Blackburn V Stoke - view commentary, squad, and statistics of the game live.Cup specialist Taylor aims to shineChris Taylor was part of the Millwall team that denied Blackburn a place at Wembley two years ago, now he is determined to help Rovers plot an FA Cup route to the national stadium.The midfielder is forging a reputation as something of a cup specialist at Ewood Park having scored all three of his goals this season in the two victories over Charlton and Swansea in the third and fourth rounds.The 28-year-old is likely to step into the breach again against Stoke on Saturday due to the absence of the cup-tied Jay Spearing and injured pair Jason Lowe and David Dunn - and Taylor is fully aware that Gary Bowyer's men will be just one round away from a Wembley trip if they can oust their Barclays Premier League opponents.Taylor was involved the last time Blackburn got exceedingly close to a Wembley FA Cup semi-final but it was his Millwall, rather than many of his current team-mates, who enjoyed the day out against Wigan in April 2013 after winning a quarter-final replay in east Lancashire."I don't really talk about it too much, to be honest," Taylor said with a wry smile.Wigan would beat Taylor's Lions and go on to cause one of the greatest FA Cup final shocks in history when they defeated Manchester City.This year, with City and Jose Mourinho's Chelsea already among the early casualties, a surprise name may once again be etched on to the famous trophy come May.Taylor explained: "It's not just Millwall (in 2013), you see teams like Bradford over the last year or two and Sheffield United have had a few good cup runs."The lower-league teams do seem to be kicking on a little bit now in in the cup

I don't know if the big boys are taking it a little less seriously as they have other priorities or the standard of play from the lower leagues is getting better."Certainly teams are going on a run from the lower league."Oldham-born Taylor, who has only ever played for his hometown club, the Lions and Rovers, has never experienced top-flight football or the international scene like plenty of his Blackburn colleagues.Yet he can point to that day out at Wembley, which he still harbours fond memories of, as a lasting memory in his career."It's every lad's dream," he added

"Some of the lads have played at Wembley - a few have, a few haven't."We're close, although we're still quite far away

But if you were to get there it's a fantastic feeling and one I'd love to do again."Taylor's likely inclusion in the starting XI could be one of a number of changes made by boss Bowyer.Back-up goalkeeper Simon Eastwood has been preferred to Jason Steele in this competition while top scorer Rudy Gestede, who remained at Rovers when the transfer window closed despite being heavily linked with Hull and Crystal Palace, came off the bench to set up the winner against Rotherham in midweek to push his claims for a starting berth.Stoke had seven senior players unavailable for Wednesday's 4-1 Barclays Premier League loss to Manchester City at the Britannia Stadium due to fitness problems.Erik Pieters (hernia) and Jonathan Walters (kneee) could return on Saturday, but defenders Ryan Shawcross (back) and Marc Wilson (groin) and midfielder Stephen Ireland (hamstring) are not yet ready to make their returns from injury

Forwards Bojan Krkic and Peter Odemwingie (both knee) are on the long-term casualty list.Hughes believes the nature of the last couple of months, in which Stoke have also faced the likes of Chelsea, Manchester United and Arsenal in a hectic fixture schedule, has taken an inevitable toll on his group.He said: "They all seem to have come at the same time of the season."And maybe it is not a coincidence, because we have just come through a really tough period for games in terms of the Christmas schedule and the quality of our opposition."Maybe we have had a little bit of reaction - we've come through that period with a good number of points, but along the way we have lost a few players."The key on Wednesday was not losing any more, and it looks like that was the case."We don't really want to be picking up any more injuries, and the longer we are able to steer clear, the better."