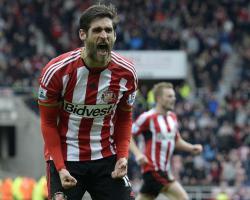 I was training with Sunderland (on Tuesday) morning and then I came down here (on Tuesday) night to get things sorted, so I'm delighted to get it done," Graham told Blackburn's official website.

"For me to get out of Sunderland and have a fresh challenge is superb for me, so I'm delighted to get it done

I can't wait to get going and hopefully we can pull together and move up the table."

Graham, who started out at Middlesbrough, moved to Carlisle in 2007 after loan spells at Darlington, Derby, Leeds and Blackpool before signing for Watford in 2009

He equalled Watford's record for the most goals scored in consecutive games, seven, before being signed by Swansea for ÃÂ£3.5million in 2011

Sunderland paid a reported ÃÂ£5million for Graham in January 2013 and he has since had loan spells at Hull, Middlesbrough and Wolves