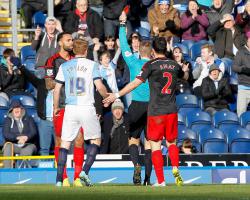 Kyle Bartley was sent off in only the seventh minute for a denying a clear goalscoring opportunity but Gylfi Sigurdsson put the 10 men ahead in the 21st minute with a glorious strike.

However, Rovers levelled two minutes later through Chris Taylor and substitute Gestede, formerly of Cardiff, put the hosts ahead with 12 minutes left

There were fewer than 6,000 fans at Ewood Park but they went home happy after Craig Conway made it 3-1 in the 89th minute

And there was still a sting in the tail to come for Swansea as Sigurdsson showed his frustration with a reckless lunge at Taylor to become the second visiting player sent off.

Both teams made changes, with Swansea boss Garry Monks naming only six of the same side that were hammered by Chelsea last weekend and leaving new signing Kyle Naughton on the bench

The Blackburn side featured six changes and their fans may have wondered where the goals were going to come from with Gestede and Jordan Rhodes only among the substitutes.

But Josh King set about ensuring the pair were not missed early on and his pace was crucial in Bartley seeing red.

The defender looked favourite to get to a long ball from Matt Kilgallon but he hesitated and an arm hooked over King's shoulder as he burst through on the edge of the box was enough to persuade Craig Pawson to send him off.

Monk responded by taking off the unlucky Tom Carroll and sending on defender Federico Fernandez.

Swansea's defence were really struggling to cope with King and he beat them for pace again with a break down the right before slipping at the crucial moment.

The ball found its way to Cairney 25 yards out and his shot was heading for the top corner before Fabianski intervened.

The pitch was hard and bobbly but Sigurdsson took the tricky surface out of the equation by blasting a shot into the top corner for the opener.

The midfielder picked up the ball on the left and drove into the middle before letting fly past a helpless Simon Eastwood from 30 yards out.

Two minutes was all it took for Rovers to equalise, though, and it was a fine move that ended with Taylor hooking in.

His cross was headed down by Cairney and Taylor showed great control on his chest before finishing smartly.

Bafetimbi Gomis had been ineffective in the first half but he set up a shooting chance in the opening moments of the second before being foiled by a good block by Shane Duffy.

With an hour gone, Bowyer sent on top scorer Gestede, who was left out entirely last weekend following reports of a bid from Crystal Palace, and in the 77th minute Rhodes entered the fray.

A minute later Blackburn were ahead

The cross came in after the hosts played a corner short and, although Gestede did not make good connection with his initial header, he reacted well to volley in

Rovers still needed Duffy to make another superb block to preserve their lead, the defender denying Angel Rangel when he looked to be clean through, while Nelson Oliveira shot straight at Eastwood.

But the result was put beyond doubt with a minute of normal time left as Conway's shot found its way under Fabianski, and two minutes into added time Sigurdsson became the eighth Swansea player to be shown a red card this season.