Henry on right track for Blackburn 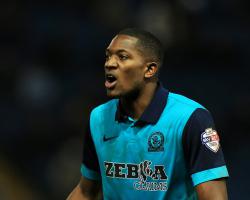 The Canadian's whirlwind beginning to life at Blackburn looks set to continue with a starting spot on Sunday.

Injury problems in defence prompted Rovers boss Gary Bowyer to take Henry on a month's loan from West Ham on Wednesday, the same day they played Sheffield Wednesday in the Championship.

Three hours after meeting his team-mates for the first time, Henry walked out onto the pitch at Hillsborough and was instrumental in the victory that just about keeps Blackburn's play-off hopes alive.

Henry said: "I got a call from the manager in the morning and I was told I was going on loan and I was hopefully playing that night.

"I had to collect my stuff from Upton Park, sign some paperwork and then be on a train

I got on the wrong train, asked the ticket man if it was going to Sheffield to find out I had to get off and get on another train.

I met the team, did pre-game stuff and then just played.

"I was just really happy to play

It's been a while

I knew me thinking too much wouldn't be good, I just wanted to get on the pitch as soon as possible and establish myself in the team."

Nelsen played for Allardyce at Blackburn, where he was captain and a hugely popular figure.

"It was funny coming to Blackburn and walking through the facility and then seeing him amongst the boards," said Henry.

"Ryan has been a mentor since he came to Toronto

I knew he was a big figure here and he was a solid defender everywhere he went.

"Junior Hoilett also played here, who's a close friend of mine, so I knew it would be a good move for me."

Bowyer is definitely without three defenders through injury in Jason Lowe, Shane Duffy and Alex Baptiste, while Grant Hanley is a major doubt

The Reds head into the weekend as favourites for the competition after fellow big guns Manchester United and Arsenal were drawn together in the last eight.

Blackburn are 25 places below their hosts, though Rodgers insists they will be treated the same as Manchester City - second in the Premier League - were last weekend.

"They got their first league win away from home in four months in the week (at Sheffield Wednesday) but we will give them the same respect we would give Manchester City or any other team," said the Liverpool boss.

"It is a big game

We made it clear our intent in this competition was to get to the final and win it and to do that you have to beat different types of teams and Blackburn will come and look to make it difficult for us.

"I think (Rovers manager) Gary Bowyer has done an outstanding job since he has gone in there.

"He's had a similar pathway to myself in terms of working in youth development so he understands football clubs from the top to the bottom.

"He has gone in there in very difficult circumstances and stabilised the club and got everyone on the same path and has done an outstanding job."

While securing Champions League football for next season remains the priority, Rodgers would dearly love to win some silverware in his third year in charge.

Having reached the semi-finals of the Capital One Cup he hopes to go at least one better in this competition, although he admits he is only interested in a final at Wembley.

Winning and getting to the final is the big priority," he said.

Defender Mamadou Sakho is edging closer to a return after four matches out with a hip problem.