Its such a Shane - Duffys disastrous run continues 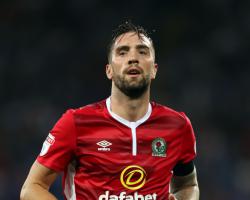 The 24-year-old Republic of Ireland international reportedly turned down a new contract offer from Rovers this week.

He was last month said to be a Celtic target and might benefit from a change of scenery after an agonising downturn in his on-pitch fortunes.

Duffy was sent off for Ireland against France at the last-16 stage of Euro 2016 in June, and on Saturday netted an own goal in Blackburn's Sky Bet Championship derby defeat at Wigan.

On Wednesday at Cardiff he netted two own goals in the first 20 minutes to leave Blackburn 2-0 behind.

Here is a look at how the form of the unfortunate Duffy has hit the skids.

Duffy is promoted to the starting line-up and plays the full 90 minutes as Ireland beat Italy 1-0 at Euro 2016 to reach the knock-out rounds.

Duffy makes sure Antoine Griezmann is halted in his tracks, moments after the France striker scores his second goal to nudge Les Bleus 2-1 ahead against the Republic in Lyon

A professional foul sees Duffy shown a straight red card, and minutes later his team bow out of the tournament at the last-16 stage.

Back on Blackburn duty for the new season, Duffy plays the Championship opener against Norwich as Rovers suffer a 4-1 home thrashing

He scores at the right end three days later in a 3-1 EFL Cup win at Mansfield.

A 63rd-minute Duffy own goal completes the scoring, as he bundles in a cross from the right in ungainly fashion and ends up tangled in the goal netting.

MAKE MINE A DOUBLE

At Cardiff, Duffy's bad luck persists as he gifts the home side an early 2-0 lead

After 14 minutes, Bluebirds wing-back Declan John bursts through and hits a shot against the right post, with Duffy stroking the rebound into an empty net