King not thinking about new deal 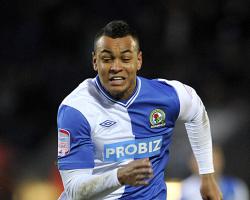 The 23-year-old scored a hat-trick in the 4-1 victory which dumped Premier League Stoke out of the competition but his current deal with the club expires in the summer.

King has made as many starts - four - for Norway this season as he has for Rovers in the Sky Bet Championship, with just 14 appearances in total for the club.

He only got his chance against the Potters because manager Gary Bowyer made eight changes as he looks to close the 11-point gap to the play-off positions but the Oslo-born former Manchester United youth team player seized his opportunity.

However, he knows he will have to put in many more repeat performances if he is stand a chance of staying on at Ewood Park or, failing that, attracting clubs of a similar stature in the summer.

"I just focus on my football

I don't want to comment too much about if I get offered a new contract or if anything happens," he told Press Association Sport after firing Rovers into the quarter-finals for the second time in three years.

That is a footballer's life and I don't want to put too much energy into what might happen in the summer window, I am just trying to do my bit on the pitch.

"Every good performance helps but I don't think about the window right now, it is too early.

I want to help Blackburn get to Wembley and get into the play-offs.

"I have struggled a bit with injuries but I am back now and I feel fit and hopefully I can just take this on to the next couple of weeks where we have important games coming up.

"It builds my confidence and now I have to keep going and hopefully I can be involved against Cardiff on Tuesday and get another goal."

Bowyer said there had been some talks over a new deal and while he insists he wants King to stay, he was not that convincing in his response to questions about the player's future.

"We have been in conversations with him and they will continue," was all the Rovers manager would say on the subject.

King's pace ripped Stoke to shreds but it was not until well after they had fallen behind to Peter Crouch's 10th-minute goal, the former England international on target for the third successive match, that the home side gained the upper hand.

Marko Anautovic and Mame Biram Diouf should have put the game beyond their opponents inside 20 minutes but their failings proved costly as King, having grazed the crossbar with one shot, nodded in Shane Duffy's header at a corner.

When he was pulled down by Geoff Cameron deep into eight minutes of added time at the end of the first half, the Potters defender was sent off and Rudy Gestede made it 14 for the season from the spot and Blackburn never looked back.

King scored two virtual identical breakaway goals within 10 minutes of the second half restarting and Stoke had nothing in response.

"The FA Cup is gone for another year, unfortunately, but we have to come together next week and make sure we keep pushing forward in the league," said a disappointed Mark Hughes on his return to his former club.

"We have got a lot to play for to finish high in the league, which we will."