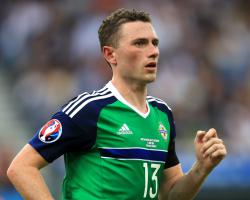 The 26-year-old's most recent appearance came on January 2 and the chronic groin problem he has been battling for over a year now has kept him sidelined ever since.

However, Press Association Sport understands Evans is expected to be named in his country's squad for the World Cup qualifier with Norway later this month, when Michael O'Neill's group is revealed on Friday.

Evans has started his country's last two World Cup qualifiers and played in three of their four games at Euro 2016 in the summer, and Mowbray insists there will be no club versus country row if he were to play at Windsor Park on March 26.

In fact, the new Blackburn boss believes Evans' inclusion in his country's plans would actually be beneficial to his club too.

"If he gets called up, there will no problem

If anything it will be a benefit if he gets some game time and some intense training to build him up.

"He has trained with us for almost a week now

I'd have to say he looks a very talented footballer, my type of footballer

He picks really lovely passes, he's got quick feet and a really good appreciation of the football.

"He needs to get fit

If he gets called up, there will no problem."