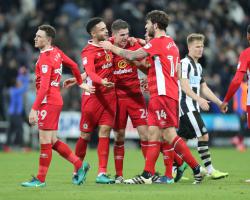 The leaders had been chasing a 10th straight win in all competitions but missed out on a new club record as they were deservedly beaten 1-0 at St James' Park.

Rafael Benitez made six changes to his team and the move backfired as Charlie Mulgrew volleyed in from a corner with 15 minutes remaining.

Brighton took advantage as they came from behind to win 2-1 at home to Fulham.

Kevin McDonald gave the Cottagers an 18th-minute lead but Brighton turned it round in the second half when Sam Baldock equalised before Glenn Murray grabbed the 79th-minute winner.

Third-placed Reading also gained ground on the leaders, making it five wins out of five after beating Bristol City 2-1.

Garath McCleary gave them an early lead with the rebound after his weak penalty was saved by Frank Fielding, and Roy Beerens soon smashed in a second.

Reading conceded their first goal in 447 minutes when Gary O'Neil netted late on but it was not enough for City.

Norwich's miserable run continued as they slumped to a fifth straight defeat against in-form Derby to leave manager Alex Neil under increasing pressure.

Bradley Johnson grabbed the only goal against his former club to make it four wins a row for Steve McClaren's men, who are now just a point behind the free-falling Canaries.

Aston Villa are up to 11th after a 3-1 win at home to Cardiff maintained their impressive form since Steve Bruce's arrival.

Albert Adomah's opener was cancelled out by Rickie Lambert but Jonathan Kodjia's header restored Villa's lead and a late penalty from Rudy Gestede sealed the win.

Paul Lambert's first home match in charge of Wolves ended in a 2-0 defeat to Sheffield Wednesday.

Fernando Forestieri put Wednesday in front from the penalty spot after winning the spot-kick himself, and he was then involved in the build-up to Kieran Lee's goal which doubled the lead.

Ipswich secured their biggest win of the season with a 3-0 victory over Queens Park Rangers at Portman Road.

Clayton Donaldson scored the opener on his return to former club Brentford and then set up the second for Ryan Shotton to earn a 2-1 win for Birmingham at Griffin Park, with Scott Hogan pulling one back late on.

Preston had to settle for a 1-1 draw at home to Burton with Callum Robinson's equaliser in first-half stoppage time cancelling out Jackson Irvine's opener.