No reservations for Tony Mowbray about taking Blackburn job 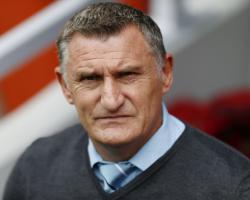 The 53-year-old ex-Celtic, West Brom and Middlesbrough manager took his first post since leaving Coventry in September when he succeeded Owen Coyle on Wednesday at a club currently second bottom in the Championship

Mowbray is the seventh manager Rovers' Indian owners Venky's have appointed, and their most recent two bosses, Coyle and Paul Lambert, were both left frustrated by the perceived lack of backing they received from a hierarchy that are deeply unpopular with the club's supporters

The new man is familiar with that type terrace-to-boardroom discord having operated under it while with the Sky Blues and though his only discussions so far have taken place with director of football operations Paul Senior, Mowbray still jumped at the opportunity to return to football after he got the phone call while sharing a coffee with Gary Pallister

Mowbray explained: "Paul Senior was the only contact - he said, 'Have I got an interest or am I just sitting at home enjoying my family and kids?' Blackburn Rovers was a club that I had to see what they had to say

I understand a situation that is at this football club

I think they (Venky's) have employed Paul to look after football matters, that's okay

All I want to do is get on, get to know this group of players.

I would have to say, I haven't dug deeply into (the off-field situation)

This is a telephone call, a chat with my wife and kids, I jumped in the car and here I am.

"I really deal with football players, but I understand

My last club was Coventry, who have some issues

The full season I had there were no issues (for me), the fanbase got behind the football team

As a football coach I want to try and galvanise the football club."

Blackburn are a club desperately in need of galvanising

A top-flight club as recently as 2012, Mowbray now has just 15 games, starting with a trip to fellow strugglers Burton on Friday, to stop the 1994-95 champions of England from sinking into the third tier.

"The only way to have positive vibes is to win football matches," Mowbray added.

"The buck stops at the result

Let's try and build the club, turn it around and put it in the right direction.

"All the stuff on the outside of it, it's there, it doesn't go away until we hopefully put the club back to where it belongs

"Sometimes things run deep but for me, as a football guy, I just want to try and create a football team that fans of Rovers want to come and watch."