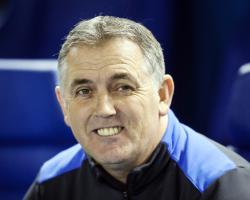 Back in the mid-90s Rovers and United were title rivals in the Premier League but time has not been kind to the former and success this season would constitute avoiding relegation from the second tier.

Sunday's FA Cup fifth round offers a chance to forget their survival battle and renew acquaintances with the Red Devils, an opportunity that Coyle is excited by.

He expects his team to rise to the occasion and give themselves a fighting chance to pull of an upset.

"To play an elite club like Manchester United is a wonderful opportunity," said Coyle.

As opposed to sitting at home watching those world-class players on TV they are going up against them.

"This game is a chance for some of those players to see how far they've got to go, to say 'maybe I need to hone my craft a little, this is what I need to do'.

"We know if we play to our best and Manchester United play to their best then, ordinarily, they will win

But if they are slightly off that's how shocks are created

It can happen in cup games.

"We need two things to happen - for us to be at our very best and for Man United to be off their game.

"That can happen in cup games and if it does we have to be ready to maximise our opportunity."

Coyle's team selection is largely dictated by those players he does not have available.

Hope Akpan and Elliott Bennett are suspended after an ill-tempered loss to Sheffield Wednesday, Lucas Joao is cup-tied and Corry Evans and Tommie Hoban have yet to return from injury.

United boss Jose Mourinho, on the other hand, is likely to rotate from a position of strength and Coyle envies the options at the Portuguese's disposal.

"I would think given the games they have coming up they will probably change personnel, which probably means they'll be bringing in a Michael Carrick or a Wayne Rooney," he said.

"They're not weakening the team

Regardless if they freshen up, if one drops out the one who steps in is a bona fide international and a player of supreme quality.

"If someone doesn't play and Wayne Rooney does, is that weakening their team? Far from it

The quality of players like Rooney and Carrick is there for everyone to see."