Owen Coyle understands the feelings of Blackburns fans after his appointment 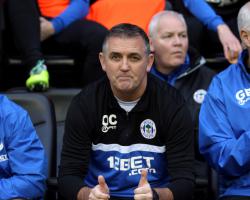 Rovers announced on Thursday that Coyle was taking charge at Ewood Park having signed a two-year deal, and at his unveiling on Friday he said not even appointing someone of the calibre of Jose Mourinho would have pacified all of the fanbase.

The 49-year-old Coyle has managed a number of clubs in the north-west, including Blackburn's fierce rivals Burnley.

And some Rovers fans have expressed their unhappiness at Thursday's news, with an online petition launched that day calling for Coyle's removal as manager having reached over 500 supporters by Friday lunchtime.

But Coyle said: "I'm not naive

I understand people have an opinion of me

But I would suggest even if Jose Mourinho came in here, there would be some fans that would not be happy!

"That's not making light of it - I certainly understand the local rivalry and everything that goes with it, and that might divide people a bit more.

"I come in with my eyes fully wide open, understanding where I've been in terms of other clubs in the north-west

There will always be divided opinion.

"But that doesn't faze me, and what we have to do is give Blackburn fans something to shout about on the field, and when we do that I have no doubt they will respond to that

The onus is on us.

This is a fresh page coming in and I'm looking to build a team so the supporters will come along and enjoy watching.

"And I would say (to fans) when you come along, come and support your team, get behind them."

Blackburn's support have made their displeasure known for a considerable time about the club's owners Venky's, the India-based company that took control in 2010.

Rovers were relegated from the Premier League in 2011-12, and finished 15th in the Championship last season.

When asked if he had been in direct contact with the owners, Coyle - who got Burnley promoted to the Premier League in 2009 and is the seventh permanent manager at Blackburn under Venky's - said: "We have had little chats with regard to what we need to move forward.

"With any club, whether you are the richest in the world or not, whatever finances are available you have to utilise it to the best of your ability.

"There will be money available in respect of working within our own parameters, and within that, we feel we can bring players that will help us.

"When the Championship starts, every team wants to be in the Premier League, and we are no different.

"Will it take hard work and a lot of things to come to fruition? Absolutely, but it doesn't faze us - we know we have done it before, and we can do it again."