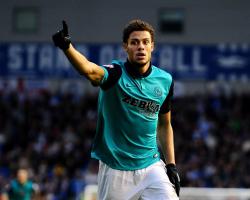 The 26-year-old has been attracting interest from Premier League clubs, with Crystal Palace having a bid turned down.

Gestede was left out of the squad for last weekend's draw with Wigan but was among the substitutes for Saturday's FA Cup fourth-round tie against Swansea at Ewood Park.

He was sent on with half an hour remaining and put Blackburn ahead with his 13th goal of the season 18 minutes later before Craig Conway sealed a 3-1 victory for the Championship side.

Lowe said: "It's just football, you get used to it

People come and go and your job is to perform well every Saturday you're out there, and that's all we can concentrate on

"There wouldn't be any interest if they weren't important players

They're very good at what they do so it's no surprise

"Obviously Rudy's come on and done the business and that's what I'd expect, the players would expect and he'd expect

"He's a good bloke off the field

It would be very easy for him to switch off and take it the wrong way but he hasn't, he's come on, he's ready to go and he's put us ahead."

Fewer than 6,000 fans were at Ewood Park for the tie but those who made the effort were handsomely rewarded.

The game turned Blackburn's way after only seven minutes when Kyle Bartley saw red for hauling down the pacey Josh King as the last man.

The 10 men went ahead in the 21st minute through a stunning strike from Gylfi Sigurdsson but Chris Taylor equalised two minutes later and Blackburn deserved their victory.

"When the big boys are in town you're underdogs and to come out with a win is a nice feeling," said Lowe

"They've got a lot of individuals with a lot of quality

Obviously the Sigurdsson goal is a hell of a hit

"The sending off obviously helped us early on

We were patient, we stuck to the game plan and got our reward in the end

"We've put ourselves in the hat now and we'll see who we get."

Blackburn's primary aim is securing promotion back to the Premier League and Lowe hopes this victory can prove the catalyst for an upturn in Championship form.

Rovers have won just one of their last seven games in the league and currently sit 10th, 11 points off the play-offs.

The skipper said: "There's plenty of football to be played but it's important to get back to winning ways as soon as you can after the turn of the year.

"We've done that and hopefully we can continue

We proved it last year when we narrowly missed out."

It was a miserable end to a poor week for Swansea, who were reduced to nine men in injury time after Sigurdsson lunged wildly at Taylor

Last weekend they were beaten 5-0 by Chelsea, making it no wins in four Premier League games, but manager Garry Monk has no doubt his side will react in the right fashion

He said: "(The season) won't fizzle out, I'll make sure of that

"We're in a difficult moment, the last two games have been very difficult for us

We wanted to put it right

All teams have had difficult moments this season and this could be ours but we'll come through it no problem."